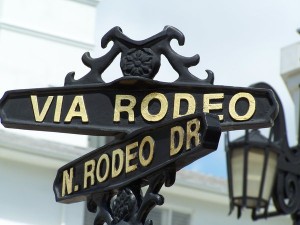 Most people have seen the movie Pretty Woman and can recall the snobby treatment dished out to Julia Roberts on her first shopping trip down Rodeo. I’ve been down Rodeo hundreds of times, and would have to say for the most part, salespeople have gotten their act together and at least won’t go out of their way to make you feel like a dirtbag if you look like you can’t afford to buy anything (although I have been ignored on several occasions). So let’s flashback to a recent stroll I had over there (and while I normally where $500 shirts and dress fairly well, this particular time I had a last minute thought on the way home from the office and happened to be in Jeans and a T-Shirt).

I haven’t had the need for business clothes (suits, ties, etc..) in ages, so everything in that department of the wardrobe was ancient. I had picked up two suits earlier in the week elsewhere and now needed the rest of the stuff to go with it. Yes, looking like a “below-average” Rodeo Drive shopper, I strolled in and asked for a dress shirt.

I could read the salesman’s thoughts. “You can afford anything here”. He pointed me to the counter, but they really weren’t what I was looking for, so I flat out asked, “Do you have Charvet?”.

“Sorry, go over there (he pointed) and talk to Stuart, maybe he can help you (Yes, his real name).”

Before showing me anything, Stuart asked where I would be wearing it, would I be wearing a suit and tie or casual, what colors, how high is the lapel on the suit, etc… He started asking questions OUTSIDE the purchase conversation, as if he wanted to know more about me, and somewhere mid-conversation I revealed to him that I would be wearing the shirt with a Kiton suit and needed an additional shirt for a second Kiton suit.  (For those that don’t know, Kiton Suits average $8,400 a piece and Charvet shirts are over $500).

His eyes lit up (even though I bought the suits elsewhere) when I told him I was wearing Kiton. As if he wasn’t enthusiastic enough, he dashed to pick out two perfect shirts, and just to make sure they would go with what I already had, he went and found a Kiton with ever so faint Burgundy pinstripes, laid the jacket on the table, and folded a few gorgeous Brioni and Charvet ties on top of the shirt.

I replied, “Wow, that’s perfect, but I like your ties better than what I’ve already bought. Add them in please, and do you have pocket squares as well?”

As he rung up the sale we chatted more. Turns out Stuart is a 68 year old man that’s been in textiles all his life, loves what he does, and will be retiring soon. Of course, he was curious about me (and what the hell I was doing for a living to justify spending over $10,000 on clothes I would only wear once or twice) so I told him.

Yes, he did become a prospect for my business, but the lesson here is in the prospecting and sales process he used, not spending a fortune to get a prospect in your business (that wasn’t my goal anyway).

What did Stuart do that you should be doing?

What didn’t he do?

First of all, he didn’t just point me over to the shirts and leave me alone.

He found out more about me.

He wanted to know why I wanted it.

He bought up conversations having nothing to do with buying a shirt.

And what did he find out?

Did Stuart get the sale (and a whole lot more)?

You bet, and he wasn’t pushy.

Are you building rapport with your prospects, or just pointing them to a video and leaving them alone?

Are you learning more about THEM so that you can point out what aspects in YOUR business will help solve THEIR problems?

Are you looking to establish common ground with them so they feel at your level and more willing to do business with you?

Are you providing value to them that cannot be matched prior to the signup?

Granted, this is still a numbers game and many prospects can be discarded on first contact, but when the iron is hot, you gotta strike and when it’s warming up, you gotta get it hot!